Iran Makes Sure Women Are Out of Presidential Elections

If you’re an active and determined female citizen that wants to become head of state, make sure first that you’re actually allowed to run for President. 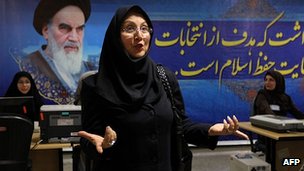 Thirty women that had registered as candidates in the Iran presidential elections were delisted following a decision of a constitutional body. As such, women were vetted out of the electoral race due to unfold on 14 June 2013. While Iranian women may run for Parliament, apparently the law does not entitle them to run for Presidency, or so they say.

Well, Romania has an equal policy law on gender but up to now, I do not recall any woman having actually enlisted to run for President. Not because there are not any who actually wish to do so, but because the only one who had publicly expressed her dream was called to orders by the “master of all knowledge”.

It’s partly due to overt and covert sexism, but also to the fact that few female political leaders over here have escaped a tainted biography and the majority knows this would be fully exploited in electoral feuds.

Cristina is a WordPress blogger who regularly writes or shares updates on media, public affairs and various topics of interest. You may follow her on Communication for Development WP blog or Twitter @CristinaPopa0
View all posts by Cristina Popa →
This entry was posted in Human Rights, International Affairs and tagged Gender, Iran, Iran presidential elections, Iranian women cannot run for President, Politics, Presidential elections, Romania. Bookmark the permalink.