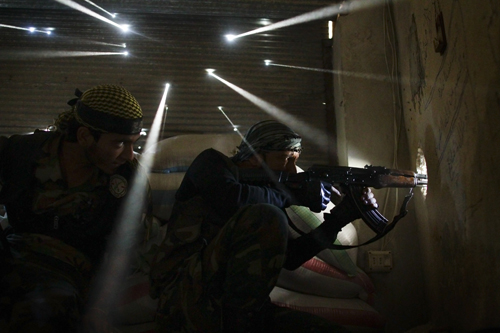 Credit: Javier Manzano / Two rebel soldiers in Syria guard their sniper’s nest in the Karmel Jabl neighborhood of Aleppo as light streams through more than a dozen holes made by bullets and shrapnel in the tin wall behind them. The dust from more than one hundred days of shelling, bombing and firefights hung in the air. Karmel Jabl is strategically important because of its proximity to the main road that separates several of the main battlegrounds in the city. Both sides (the Free Syria Army and the regime) rely heavily on snipers in a cat and mouse game along Aleppo’s frontlines. (Photo taken October 18, 2012)

Credit: Manu Brabo / AP
A Syrian man cries while holding the body of his son near Dar el-Shifa hospital in Aleppo in October 2012. The boy was killed by the Syrian government forces

Credit: Rodrigo Abd / AP
A boy called Ahmed mourns during his father’s funeral in Idlib in March 2012. The child’s father was killed by a Syrian army sniper

Credit: Manu Brabo / AP
A wounded woman still in shock leaves Dar el-Shifa hospital in September 2012. She was injured during shelling by Syrian government forces which killed dozens of civilians, including four children, in Aleppo

Credit: Narciso Contreras / AP
A rebel sniper aims at a Syrian army position, as he and another rebels are reflected in a mirror in the Jedida district of Aleppo

Cristina is a WordPress blogger who regularly writes or shares updates on media, public affairs and various topics of interest. You may follow her on Communication for Development WP blog or Twitter @CristinaPopa0
View all posts by Cristina Popa →
This entry was posted in Human Rights, International Affairs, Media and tagged AFP, AP, Breaking News Prize, Pulitzer, Syria. Bookmark the permalink.

6 Responses to Pulitzer For Coverage of Syrian Conflict Horrors